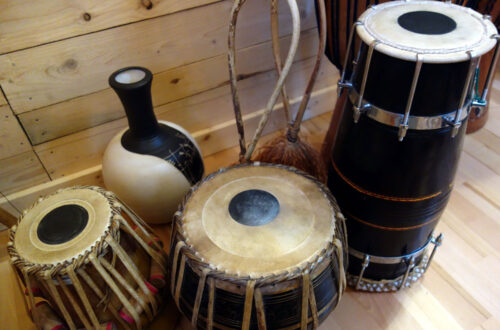 Reviews of the book Rhythm Oracles:

This book has everything a modern rhythm school needs: Florian Gaethgens , on 06.05.2013

An author with a lot of experience in playing rhythm instruments and in passing on this skill as well as a clear theory that describes as simply and comprehensibly as possible everything it takes to play and understand the rhythms of the world. Essentially, this is the knowledge of pulsation and its subdivisions and groupings on which Daniel Giordani bases his rhythm theory and notation system.

There is a very brief overview of the most important drums in the world and a very good introduction to the playing technique of the djembe, which Giordani rightly recommends as the most suitable beginner drum; because it is now widespread worldwide and its basic playing technique can be easily transferred to other drums.

The heart and showpiece, however, is the oracle itself, which actually represents nothing more than a sophisticated system for randomly compiling an almost infinite number of rhythms and exercises with the help of the supplied chips ("game pieces"). These stones are printed cardboard cards and a set of beautiful round and rectangular stencils on which they are placed. The pleasant thing is that Giordani mentions the "esoteric" meanings, which one could well think of with the name "oracle", without obligation, but does not put them in the foreground. So you can draw "power rhythms" or throw a rhythm from your name or date of birth. None of this is in the foreground. It remains a cleverly devised system that represents a playful approach to the world of rhythms, which is fun and supports the understanding of the construction of rhythmic structures by the way.

The book also goes into depth: we learn to distinguish divisive and additive rhythms, learn all about the advantages and disadvantages of the hand-to-hand technique and get to know alternatives. We hear about time-line formulas and the "magic of the 12". Again, this is a clearly structured drumming craft, which you can learn with this little booklet.

The materials are haptically and visually great designed, the enclosed audio CD offers plenty of good-sounding accompanying tracks, the texts are concise and understandable and really offer everything that is helpful and important for self-learning or teaching with the drum.

A useful supplement to other drum lessons ORFF Schulwerk Information , on 27.06.2013

If you let the title of Daniel Giordani's book have an effect on you, you are immediately taken into a transcendent context of meaning. An oracle (derived from the Latin noun oraculum: godly saying, intercom) refers to a divine or transcendent prophecy obtained through a certain ritual, e.B for women to the future or as a decision-making aid; often inscrutable and enigmatic in his statement.
The title will probably not be meant quite so profoundly, since the book is essentially a play and work book in which one approaches the phenomenon of rhythm in a playful way with the help of notation symbols. The subtitle – "an alternative drum and rhythm school" – is quite accurate and points to a pedagogical approach that stands out from other drum schools.
So what is it all about?
With the help of tokens or the cards attached to the book, which are designated with the notation symbols of the most important sounds (bass, open, open tone, slap and pause) of the drum, rhythms are compiled according to different rules of the game. As in some card games, the rhythm blocks are drawn face down and placed in fixed grids of pulsations in groupings of 2, 3, 4, 6, etc. The resulting rhythms are therefore not foreseeable in advance, but purely by chance. In contrast to other drum schools, hardly any fixed rhythm models are offered here, no improvisation specifications, but structuring suggestions.
In doing so, Giordani uses a graphic notation that is used by many drummers and percussionists (cf. Ulrich Moritz / Klaus Staffa in: "Trommeln ist Klasse", Fidula-Verlag), but rarely finds its way into literature.

This could be called pulsation writing, which represents the different subdivisions of a rhythm structure as well as the "beat reference" (similar to the way ethnomusicologists do). Hard-to-read punctures and overbindings, as in Western notation, which are based on the various note values, are thus eliminated, and rhythm structures thus become easier to grasp. These notation grids can be found, next to the sound symbols, in the cover of the book. In addition, there are also templates for a circle notation, which represent cycles and rhythms in circular form.

The book is very clear and clearly structured.

- Especially in the first chapters, the drum beginner and interested layman will find a number of basic exercises and explanations on the phenomenon of rhythm. This also includes excursions into instrument science, vibration theory, brain research as well as playing techniques of the African djembé drum, to which the author refers in particular. (Sometimes in these sections of the book, the impression of being close to other publications, such as "Rhythm for Evolution" by Reinhard Flaitschler, cannot be completely avoided.)
- From the 5. Chapter it then starts with the "Oracle Games". These are very clear and coherent and offer opportunities to play and experiment on their own, with a partner or in a group.
Other well-known drum teachers such as Michael Siefke or Uli Moritz offer similar playing models, but Daniel Giordani's book is characterized by an almost meticulous systematization of his playing ideas.
- In further chapters he tries to build a bridge between non-European spirituality and his game proposals. Suggestions are made on how to achieve one's own strength and auxiliary rhythms or how to create rhythm patterns with words and numbers and invented tables as well as assigned drum sounds.
The question of whether one can actually create "own rhythms" through inner alignment, for example through personal wishes and the subsequent "pulling" of rhythm building blocks, or whether this is "only" a constructed approach that leaves the emergence of rhythms to chance, cannot be answered here. The reader has to try this out for himself. It probably also depends on the personal world view. In any case, this access leads to interesting results and creative application ideas.

Conclusion: This book offers a wealth of playing and experimentation possibilities, which above all puts the "constructibility" of one's own rhythms in the foreground and thus represents a useful supplement to other drum lessons. Incidentally, a rhythmic basic training is stimulated and deepened by constantly used graphical notation.
(Review in summer 2013)

Here, the rhythm enthusiast quickly and easily learns a lot about feeling and playing rhythms. In the form of pulsations and their subdivisions and groupings, basic rhythmic structures are first presented and explained in an easily understandable way. In addition, you get to know some important drums of the world and are introduced to the game on the djembe. With this basic knowledge, we then go to the enclosed oracle, where rhythms can be "drawn" on round or linear templates with the help of different tiles for different sounds.
The book shows many examples of this, which can also be used really great in groups. Especially the work with seniors, kindergartens, students or hobby groups gains inspiration, and there are plenty of additional tips for this. This can be deepened with special force and auxiliary rhythms or time-line formulas.
Rating: Four out of 5 recommendation points
(Review in issue 5/2013)

We use cookies on our website to give you the most relevant experience by remembering your preferences and repeat visits. By clicking “Accept All”, you consent to the use of ALL the cookies. However, you may visit "Cookie Settings" to provide a controlled consent.
Cookie SettingsAccept All
Manage consent

This website uses cookies to improve your experience while you navigate through the website. Out of these, the cookies that are categorized as necessary are stored on your browser as they are essential for the working of basic functionalities of the website. We also use third-party cookies that help us analyze and understand how you use this website. These cookies will be stored in your browser only with your consent. You also have the option to opt-out of these cookies. But opting out of some of these cookies may affect your browsing experience.
SAVE & ACCEPT